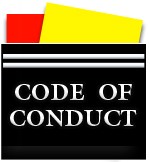 It is the goal of the Northwest Connecticut Recreational Soccer League (Barkhamsted, Colebrook, Hartland, Norfolk, Winsted) to provide a safe, fun, and enjoyable environment for our children to learn and play soccer. It will be the primary objective of every Coach, Referee, and Parent to ensure that this goal is achieved and maintained across all towns in our league.

All coaches, parents, and players shall read and agree to this Code of Conduct, acknowledging that he/she understands and agrees to comply with this contract. By virtue of registering and being given this document, either via the website or paper registration, all players, coaches, and parents shall be held accountable for their actions. It is the responsibility of every member of this league to ensure that every participant understands and complies with the guidelines set forth.

No Coach, Player or Spectator shall:

Any inappropriate behavior by a spectator may be cause for the suspension of the game by the Referee. The Referee will engage the respective team head coaches to have the spectator removed. Game suspension may continue until such time as the spectator leaves the soccer field or complex area and deemed satisfactory to the referee.

Northwest Connecticut Recreational Soccer League representatives, one representative from each town and the head referee, will review all infractions of the Code of Conduct. Depending on the seriousness or frequency, the league may assess additional disciplinary action up to and including expulsion from the league.

As a player, I hereby pledge to:

As a parent, I hereby pledge to provide positive support, care, and encouragement for my child by: